Sally has a BFA in Graphic Design and Fine Art from the University of South Carolina and was beginning her career as a graphic artist when she realized something, she was bored. However, a vacation to the deserts of the Southwestern United States changed everything. During her trip, she was introduced to artists from the area whose dramatic use of color stirred her soul.

That was when Sally realized her lifetime goal was to become a fulltime painter. She’s been following that dream ever since. Expressive use of color and bold designs are the hallmarks of her style. Though she started with watercolors, she now enjoys pastels, acrylics and mixed media.

Currently US Airways features her paintings in the US Airways Club at Tampa International Airport. Her paintings were also on display in the American Embassy in Rome, through the Art and Embassies Program in 2001. Sally’s work has been selected as the featured art for several art festivals in Florida over the past ten years. “Santa Fe Poppies” graced the cover of Tampa Bay Magazine in their September-October of 2002 issue. In Spring 2011 Sally was the featured artist of The New Barker magazine with her painting of “Bella and Bentley”.

Her lithographs have appeared in television show Nip/Tuck and the movies American Dreamz and Shock and Awe. 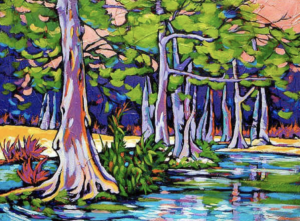